St. Philomena’s Church in Mysore is one of the oldest Churches in India. It is over 200 years old. Initially over 250 years ago there was a small Church in its place. When the Capital of Mysore state was move from Srirangapatnam to Mysore city in 1799, many British officers and soldiers came and settled down in Mysore.

The Maharaja Krishnaraja Wodeyar III realized the need for a Christian church for these people. So the Maharaja gave them a small plot of land on the Mysore-Bangalore Road and a little church came up there. As the city expanded and the Christian population of the city increased there was a need for a larger church. 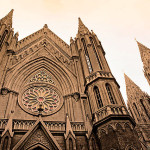 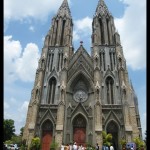