Sri Krishna Temple Founded by Sri Madhwacharya, the Statue of Shri Krishna in the famous Temple turned around to give Darshan to the Devotee Kanakadasa.

Anantheshwara Temple has great Spiritual and Historical significance. Parents of Sri Madhvacharya had worshipped the Deity of this Temple continuously for 12yrs to beget a child. The great Acharya was born in fulfillment of their penance.

Chandramoulishwara Temple there is another Hoary Shrine, known as Chandramoulishwara, situated at a lower altitude, exactly in front of the Anantheshwara Temple. According to another legend, Shiva Linga of this shrine Symbolizes Lord Shiva who appeared here in response to a penance performed by Moon-God in an adjacent grove. 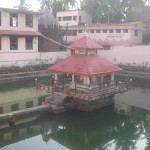