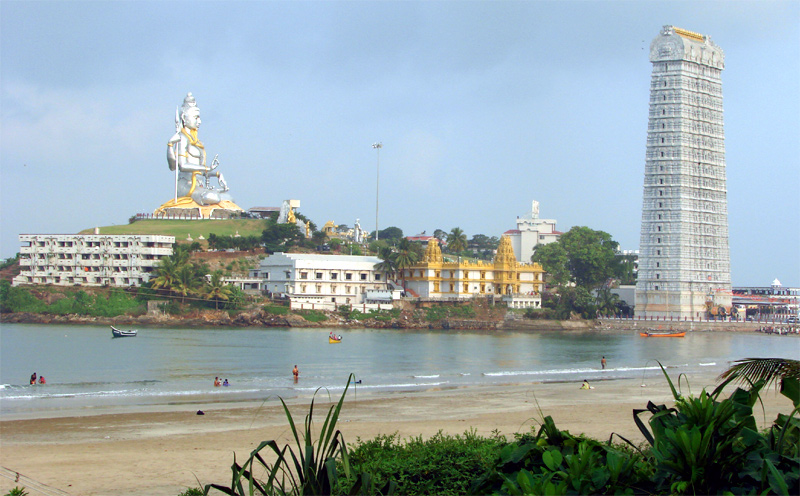 Murdeshwar is 110kms from Udupi The famous Shiva Temple, believed to have been Sanctified by a piece of the Prana Linga of Mahabaleshwar of Gokarna thrown down by the demon Ravanasura and it has some Beautiful Carvings & Statues. With the Roaring sea to the west, the towering Hills to the east & the Coconut Groves nearby. The Pigeon Island is off the coast.  Bounded by the shimmering sea and Rolling Hills, Murdeshwar is the sort of place which makes you contemplate about life and what it means to you. The sea is an intrinsic part of the Temple scape at Murdeshwar.

The sea surrounds the Temple towering on the small Hill called Kanduka Giri on three sides. A huge 15mtr statue of Shiva towers over the town and has an overwhelming presence. The Statue, which is only a couple of years old, is in a complex which encompasses the 500 year old Shiva Temple. With the Roaring sea to the west, the towering hills to the east and the coconut and areca groves nearby, the temple attracts a lot of Devotees.

The Temple is covered with Chalukya and Kadamba Sculptures in the Dravidian style and is believed to be located on the spot where Ravana flung the cloth covering the Atmatlinga at Gorakana while lifting it.  Two life size Elephants in concrete stand guard at the steps leading to the temple. The temple has several other beautiful carvings and statues that date back to a few centuries. There is also a huge fort behind the temple said to have been renovated by Tipu Sultan, the ruler of Mysore. 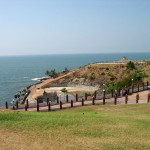 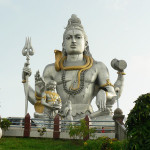