The Sanctum was renovated in recent years by a learned Astrologer, Venkitasubba Jois. With the installation of the new image of Adi Shakti, now the Temple is called Adi Shaktyatmaka Shri Annapoorneshwari. Deity of the Temple has been designed in unique manner.

The single image depicts the Devi standing on a peeta with Devi Gayatri, Sri Chakra, Shanku and Chakra in Her four hands. The recently renovated Sanctum of the Temple is surrounded by Adi Sesha. While the Padma Peeta is formed by Ashtagaja, Koorma and others 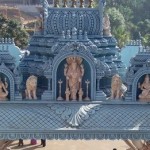